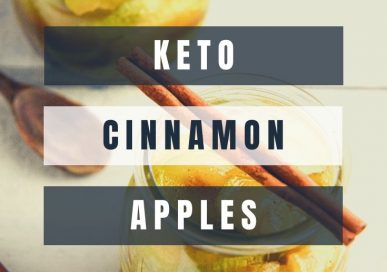 Incredibly simple, yet incredibly delicious! These keto cinnamon apples are the perfect sweet side dish for a holiday (or anytime) meal!

WHAT ARE KETO CINNAMON APPLES?

Cinnamon apples are a sweet dish perfect for breakfast, lunch, or dinner. They are often found on holiday menus around the United States, especially in the south.

Traditional cinnamon apple recipes are very simple and normally consist of sugar (often brown sugar), cinnamon, water, butter, and apples. The mixture is placed over heat and cooked until the apples are soft and the sauce mixture begins to thicken.

This recipe, however, removes the sugar-filled components and replaces them with keto-friendly ingredients. This makes this recipe the perfect addition to your next family meal or holiday get-together.

Before you set out to make this recipe, make sure you have the following ingredients on hand first.

After you have this on hand, you’re ready to go!

HOW TO MAKE KETO CINNAMON APPLES

WAIT… THERE AREN’T REAL APPLES IN THIS RECIPE?

No, there are not. Apples are full of sugar and should not be eaten on a low-carb/ketogenic diet.

In fact, on average, apples contain around 25g of carbohydrates per apple. For this recipe, you’d need several apples to make it.

Therefore, it would be chock full of carbs!

A good cinnamon can make or break a recipe. Most of the time, we opt for whatever ground cinnamon is in the spice aisle and think no further.

Here are some things to consider when thinking about cinnamon and your home cooking.

Believe it or not, there are two main kinds of cinnamon found on store shelves; ceylon and cassia.

Cassia cinnamon, the most common, comes from the cassia tree, which originated in South China.

Cassia is considered a lower quality cinnamon since it is very cheap. Because of this, most cinnamon on grocery store and supermarket shelves is cassia cinnamon.

It is most widely described to have a stronger, spicier cinnamon flavor.

Ceylon cinnamon, otherwise known as the “true” cinnamon is found in Sri Lanka and Indonesia. This variety is less common and is more expensive than cassia cinnamon.

Since it has a more delicate, sweeter flavor, ceylon cinnamon is thought to be the absolute best cinnamon to use in anything sweet.

If given the choice between these two, opt for ceylon cinnamon if you’re able to find it in stores near you. However, if you prefer the taste of regular cassia cinnamon, it will certainly do the job.

By fresh cinnamon, we are referring to cinnamon that hasn’t yet been ground into a powder.

Some folks swear grinding your own cinnamon stick is the best way to go about cinnamon.

To go about this, first buy whichever type of cinnamon stick you prefer. Break the sticks into smaller piece and place into a coffee grinder.

Grind the cinnamon until it is a fine powder.

Transfer your freshly ground cinnamon to an air-tight storage container and place into your spice cabinet.

You may find cinnamon labeled as organic. Generally, this could indicate it is ceylon cinnamon. Otherwise it probably just follows whatever organic “rules” that particular company has set forth.

Is organic cinnamon worth it? That decision ultimately lies with you. However, the title “organic” usually comes with a higher price tag the product quality doesn’t live up to.

Depending on how you like your cinnamon apples sauce, you may want to use a thickening agent in this recipe.

We recommend using xanthan gum to thicken things with.

If you’re not familiar with xanthan gum, it is a popular food additive commonly added to thicken and/or stabilize foods. The gum is sold as a white powder and can be found in all kinds of processed foods of today.

For liquids, xanthan is used to thicken the liquid into a more sauce-like consistency.

Since cinnamon apples are normally covered with a thick cinnamon sauce (thick thanks to sugar, normally) you might want to replicate this at home as well.

WHAT TO EAT CINNAMON APPLES WITH

Even though they are most commonly eaten as a breakfast food or side dish, cinnamon apples are especially delicious around the holidays.

Therefore, some of the best (and most common) pairings for keto cinnamon apples involve yummy Thanksgiving and Christmas dishes.

Here are a few recipe ideas to get you started on your way to a delicious meal!

Yield 6 Serving Size 1
Amount Per ServingCalories 169 Total Fat 16g Carbohydrates 4g Protein 1g
Nutrition facts are provided as a courtesy, sourced from an online food database. All carbohydrate counts are calculated as net carbs instead of total. Net carb count excludes both fiber and sugar alcohols, because these do not affect blood sugar in most people. We try to be accurate, but feel free to make your own calculations.