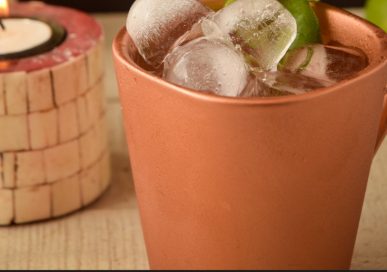 Ginger ale with a delicious kick of Key lime. With only a few ingredients, you can quickly stir up one heck of a delicious keto-friendly Moscow mule!

WHAT IS A MOSCOW MULE?

A Moscow mule is a cocktail made with vodka, ginger beer, and lime juice, garnished with a slice or wedge of lime and mint leaves.

The Moscow mule is popularly served in a copper mug, which takes on the cold temperature of the liquid.

WHERE DID THE MOSCOW MULE ORIGINATE?

The New York Herald Tribune wrote a piece in 1948, which recounted the story of how the Moscow mule came to be.

The mule was born in Manhattan. The birthplace of “Little Moscow” was in New York’s Chatham Hotel. That was back in 1941 when the first carload of Jack Morgan’s ginger beer was headed to give New Yorkers a happy surprise.

Three friends were in the Chatham bar when two of them wondered what would happen if a two-ounce shot of vodka joined with Morgan’s ginger beer and the squeeze of lemon. Ice was ordered, lemons procured, mugs ushered in and the concoction put together. Four or five days later the mixture was officially named the Moscow mule.

In 2007, another story of how the drink was created surfaced and attributed its creation to Wes Price, a bartender. According to this story, Price created the drink when trying to “clear the cellar” of products that didn’t sell well, such as Smirnoff vodka and ginger beer.

Before you can make one of these delicious drinks, you will need to have the following ingredients on hand.

After you’ve got everything on the list, you’re set and ready to create!

HOW TO MAKE A KETO-FRIENDLY MOSCOW MULE

Begin by juicing a whole lime (variety of your choice, but Key limes are delicious). Combine all of the ingredients together and give a gentle stir.

Use a copper mug for extra authenticity!

DO MOSCOW MULES USE MINT?

Traditionally, yes, Moscow mules incorporate a sprig of mint for a minty taste. However, this recipe doesn’t call for mint because we opted for the lime taste instead.

If you’d like to add mint to your mule, feel free. Gently mash or crush part of the leaves/stem before adding it to the liquid for a more defined minty taste.

Traditional Moscow mules are not keto. Most ginger beers have at least 10g of carbohydrates per bottle, which of course, translates to non-keto. The good news is, however, thanks to the use of Zevia, this recipe is 100% low-carb and keto!

WHAT IS THE DIFFERENCE IN KETO AND KETO-FRIENDLY?

There is often some confusion as to the difference in the term “keto” versus “keto-friendly.” While the two terms are often used interchangeably by those on keto, they actually mean two different things.

Used alone, keto (or ketogenic) references a food, recipe, or way of eating that is high in fat, has a moderate amount of protein, and a low (usually five or less) amount of carbs.

Generally, those eating a keto diet aim for 20g (sometimes 30g) of carbohydrates or less daily. However, they try to make 70% of their calories come from fat.

Keto-friendly, on the other hand, is a food or ingredient that is able to be consumed while on the keto diet. These foods/ingredients are very low in carbohydrates (3g or less) and generally have little to no fat or protein.

Just because an ingredient is keto-friendly, that doesn’t make it “truly keto.” It just means it is safe to eat because the carb count is low enough.
null

No, you certainly don’t have to use a copper mug. Using any kind of glass or mug is perfectly fine.

Yield 1 Serving Size 1 recipe
Amount Per ServingCalories 100 Total Fat 0g Carbohydrates 0g Protein 0g
Nutrition facts are provided as a courtesy, sourced from an online food databse. All carbohydrate counts are calculated as net carbs instead of total. Net carb count excludes both fiber and sugar alcohols, because these do not affect blood sugar in most people. We try to be accurate, but feel free to make your own calculations.