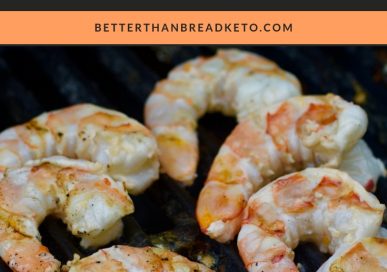 A few simple ingredients will make a delicious summer dish. These low-carb coconut grilled shrimp are light, yummy, and super easy to make!

WHAT IS LOW-CARB COCONUT GRILLED SHRIMP?

Low-carb coconut grilled shrimp are shrimp that have been marinated in coconut milk (with other ingredients) before being grilled and served. The shrimp take on a light coconut taste from the milk.

The recipe also calls for chili garlic sauce to be added to the marinade, which helps to add a delicious hint of spice to the shrimp.

Best yet, grilling the shrimp gives them that wonderful grilled taste we all know and love. Coconut, shrimp, spice, and char… What’s not to like?!

Even though this recipe is simple and doesn’t require a lot of ingredients, you’ll want to make sure you have the following things on hand before making this dish.

After you have these, you’re set and ready to grill!

In a mixing bowl or other comparable container, combine all of the ingredients together, except the shrimp. Set aside a small amount of the marinade for basting later on.

Add the shrimp and stir gently to ensure the ingredients are mixed and cover all of the shrimp evenly. Cover the container and place into the refrigerator for 2 hours to marinade.

Preheat your grill to 450˚F. Using a pair of tongs, remove the shrimp from the marinade and place onto the grill.

Cook on each side for 3 – 4 minutes or until the shrimp turn a beautiful pink and white. While cooking, you can baste them with the extra marinade as they cook.

When the shrimp are done, remove and chow down!

WHERE CAN I FIND COCONUT MILK?

Canned coconut milk (the easiest way to buy it) can be found in your local grocery or supermarket. Generally, cans can be found in the International section or wherever the store has its Asian ingredients.

Alternatively, you can buy coconut milk online from different stores or suppliers. You may also be able to find it packaged and sold in a different method (such as in a carton or other packaging) in your local stores.

CAN I USE A DIFFERENT SIZE OF SHRIMP?

First, it is important to understand how shrimp are sized for resale.

Shrimp are categorized by how many shrimp will found in the package. They are also always sold by the pound.

For instance, if the shrimp are very small and generally 60 to 70 shrimp make up one pound, then the bag or container will have 60/70 on it.

For this recipe, we recommend using large shrimp, which are generally labeled U/10 or U/15, depending on your grocery store. The nice large shrimp make for good eating and are easy to cook on the grill without fear of them falling through the grates.

When choosing the size of shrimp you’d like to use for this recipe, any kind will work. If you want more, smaller shrimp, use 50/60 or 60/70. If you decide to do this, you’ll want to use a wire rack or something similar so the shrimp don’t fall into the grill.

Truly, the choice is yours. Just keep in mind, smaller shrimp will cook faster and will need to be watched much more closely than the larger shrimp mentioned in this recipe.

DO I HAVE TO USE COCONUT MILK?

Well, since this recipe is called “coconut grilled shrimp,” using coconut milk is definitely recommended. However, we understand the use of coconut milk isn’t for everyone.

If you’d prefer to use something else in place of the coconut milk, you’re going to want to use heavy cream. It will help to marinate the shrimp just like the coconut milk. Using cream won’t impart any extra carbs, either.

IS GARLIC CHILI SAUCE THE SAME AS SRIRACHA?

On the surface, no. In fact, this question was the topic of a huge debate on the online forum, Reddit. Tons of people weighed in their thoughts on the topic. Most answers focused on the differences in the taste or the consistency of each sauce.

One answer stood out amongst the rest. It was simple, concise, and made a ton of sense.

Sriracha contains added sugar, which is then fermented to yield a sour note. Chili garlic paste doesn’t contain added sugar and is not fermented.

I tend to think of chili garlic paste as a seasoning/base ingredient to be cooked into or incorporated into the dish, and sriracha as a condiment, for the person eating the meal to add as they see fit. There’s no reason you couldn’t use the one for the other, though.

And, in short order, there you have it. The sauces contain most, if not all of the same ingredients. The main difference is the one thing we hate on keto/low-carb diets; sugar.

They are interchangeable as far as taste is concerned, so why not always use the one that has no added sugar?

WHAT IF I WANT THE SHRIMP TO BE SPICIER?

Simple! Just add more chili garlic sauce to the marinade and it will help to make the dish spicier. You can also add spoonfuls of the sauce directly to the shrimp as they are cooking on the grill.

WHY AREN’T THESE SHRIMP CONSIDERED KETO?

Even though coconut milk is a keto ingredient, it is only used as a marinade. Because of this, the fat from the milk doesn’t translate to the shrimp themselves.

Therefore, these shrimp are only considered low-carb, not ketogenic because the fat content isn’t high enough.

WHAT TO EAT LOW-CARB COCONUT GRILLED SHRIMP WITH

These shrimp make a delicious appetizer or side dish. If you’d prefer, they could even serve as the main course. Regardless, they probably aren’t going to fulfill your hunger all by themselves.

Here are some great ideas of what to make with the coconut shrimp to get you started.

Yield 2 Serving Size 6 shrimp
Amount Per ServingCalories 350 Total Fat 5g Carbohydrates 2g Protein 30g
Nutrition facts are provided as a courtesy, sourced from an online food databse. All carbohydrate counts are calculated as net carbs instead of total. Net carb count excludes both fiber and sugar alcohols, because these do not affect blood sugar in most people. We try to be accurate, but feel free to make your own calculations.